Touch Football is probably the easiest sport to play with your friends and you are in the best place to get to know where and how!

The Touch Football Australia Beginners' Hub contains everything you need to know to take the field for the first time, whether you’re playing Men’s, Women’s, Mixed or Juniors touch footy! 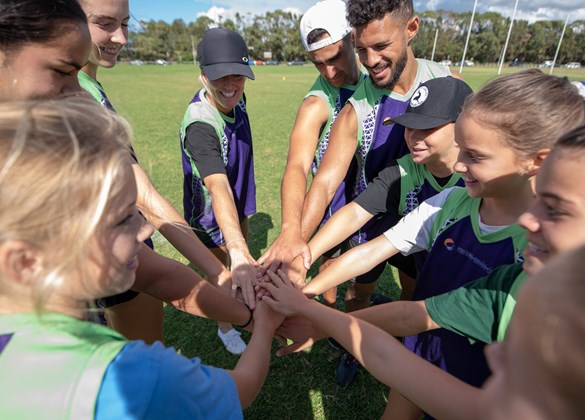 Help me out with the touch football terminology/language

The aim of the game is to score a try by getting through the opponent team's part of the field and placing the ball down in the "in-goal area".

Teams are made of up to 14 players, with a maximum of six (6) players on the field at any time with unlimited substitutions. The game lasts 45 minutes, divided into 2 x 20 minutes halves and a five (5) minute half-time break.

Just before the game, team captains gather with the referee/s for the toss. The winner chooses which direction they want their team to run in, and which team will start the game with a "tap" on the halfway line.

The rules are quite simple, and even if it's your first time playing, you will pick up the basics in no time and enjoy the game with your teammates, no matter what everyone's skill level is.

Basically, while attacking, you have to run forward and pass the ball backward; that means the ball carrier is up front, with their teammates on the same line or slightly behind them, so they can pass the ball to them!

Defenders only need to "touch" the ball carrier to stop the attacking team; the rules of the game stipulate that the "touch" has to be made "with the minimum force necessary". It can be done on any part of the body, including the ball or clothing. The "touch" can also be made by the ball carrier on a defending player.

After making a "touch", the defending team has to go backward behind an imaginary "defensive" line, seven (7) meters away from where the touch has been made; the referee will show you where they expect you to be. The ball carrier has to perform a "rollball", on the exact mark where the "touch" was made. Be careful not to be "over the mark" when performing a roll ball.

Your team will have six "touches" as your opportunity to score. The sixth "touch", dropping the ball, or any infringement to the rules result in a "changeover" where the ball is given to the opposing team.

Looking for the full version of the playing rules of touch football?

An Evening Down At The Field

Usually, players should arrive at least 15 minutes before the start of the game. Depending on the level of completition, your team's warm up might be pretty casual, or for serious teams it might be more intense!

Once your team is ready, you simply start playing as soon as both teams are on the field, with a referee ready to officiate, and after the siren has sounded. It's always good to be ready to go as soon as the siren sounds, so make sure you take note of your game's scheduled start time. Our match timer is automated, so we can't wait for you to be ready before sounding the siren.

The game lasts 45 minutes, divided into 2 x 20 minutes halves and a five (5) minute half-time break. In just an hour, you can have a run, a good time, a workout while having the thrill that touch football brings to players.

We also run a canteen on game nights, which sells a range of food and drinks, so once your game is finished don't forget to stop by!

Touch football is often referred to simply as "touch", or "touch footy". It can be played everywhere across an extensive affiliated network within Australia. Touch Football Australia is the national governing body for the sport of touch football, the only organisation recognised by the Australian Sport Commission to conduct touch football competitions.

Playing within an affiliated competition such as ours ensures you that you are covered with insurance and you enjoy the best "touch football experience", with quality fields, organised fixtures and dedicated volunteers to make sure the games flow smoothly and people enjoy their time down at the field.

Ready to get started?

Now all you have to do is find your closest junior touch footy club and register!